We use cookies on our website. They help us get to know you a little and how you use our website. This helps us provide a more valuable and tailored experience for you and others.

You can revoke cookies at anytime at the bottom of the page.

Curator Koen Broucke has produced a series of works based on his many years of research into the Battle of Waterloo. He stages a fascinating dialogue between these works and books, prints and drawings from the collections of the Royal Library of Belgium.

In these 18th and 19th century prints and books the Napoleonic battles are depicted in a very aesthetic way. Colourful uniforms and the heroism of the waves of French attacks in beautiful landscapes turn war into art.

Curator Koen Broucke wants to make the present-day visitor reflect on the way war is represented. In view of this, the title 'The Beauty of War' is somewhat shocking.

"This exhibition should in fact have been called 'The Beauty of the Depiction of War', or better still, 'The astonishing conclusion that art (at the time mainly paintings and drawings) was able to transform something as terrible and cruel as war into something beautiful.' The omission in the title creates an ironic tension, which makes it even clearer how horrific and ugly war is. "

Alongside well-known works of Joseph Mallord William Turner, Francisco Goya and James Ensor, some lesser-known and surprising material has surfaced.

Specifically on the Battle of Waterloo, several never before seen visual sources from shortly after the battle are on exhibit. For instance, an old rather unremarkable grey folder in the Royal Library's Print Room turned out to be an 1815 album filled with small sketches of costume studies by Jean-Baptiste Rubens.

The exhibition also prompted the artist to donate several acrylic drawings, pen drawings and etchings to the Royal Library. The Royal Library is delighted to accept this donation, as it is an illustration of the crosspollination between academic research and contemporary art.

Open Monday to Saturday from 9 am to 5 pm, except when the Library building is closed. In July and August, the Library is closed on Saturdays. More information (in French or Dutch) on www.kbr.be. 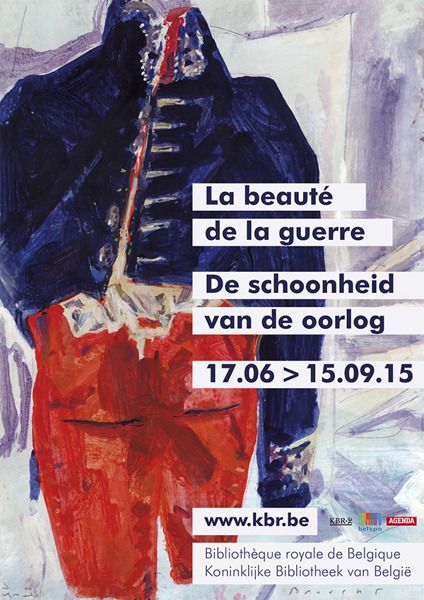 KBR is the national scientific library and collects all Belgian publications. The institution preserves, manages and studies more than 8 million documents, a rich cultural and historical heritage.

KBR provides access to all information in its collections, facilitates research and offers a broad cultural experience.